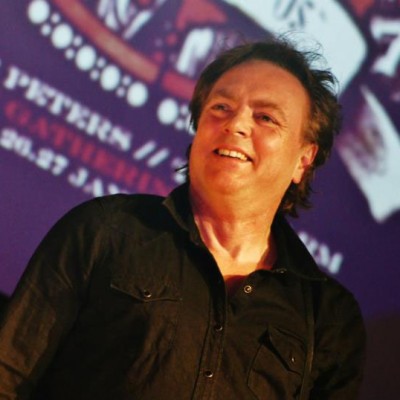 Stevenson started his career with the London-based punk band Chelsea in 1977, while he was still at school studying for A Level exams. He joined Billy Idol in Generation X in 1980 around the time that band’s “Dancing With Myself” single was release. After Generation X, Stevenson played for Kim Wilde, contributing to her first album Kim Wilde and second album Select and performing in all Wilde’s early videos including “Kids in America”. Stevenson then formed Hot Club with former Sex Pistols bassist Glen Matlock. They released two singles on RAK Records.
In 1985 he was asked to join post-punk band Gene Loves Jezebel when their guitarist left suddenly at the beginning of their first U.S. tour. Stevenson performed on the band’s albums Discover, House of Dolls, Kiss of Life, Heavenly Bodies, VII and The Thornfield Sessions. He produced Gene Loves Jezebel singer Jay Aston’s solo album Unpopular Songs as well as Beki Bondage’s solo album “Cold Turkey” and others.

During 1994 and 1995 he provided additional guitar player services for The Cult during their world tour. He also contributed guitar to the song “Brand New You’re Retro” by Tricky from his Maxinquaye album. He has contributed as a session guitarist on numerous recordings including artists as diverse as Scott Walker, Jimmy Nail, Helen Terry, Louise and The Hothouse Flowers and has composed music for TV and film.

In 1998, seven years after Mike Peters left The Alarm, he called upon Stevenson to back his solo projects and he has been a permanent fixture through Peters’ subsequent musical incarnations, resulting in minor chart success, first under the guise of The Poppyfields with the Top 30 hit “45 RPM” in February 2004,[6] and as The Alarm MMVI with the No. 24 single “Superchannel” in February 2006 (from the album Under Attack).
Stevenson still plays with The Alarm and Gene Loves Jezebel (Jay Aston’s version) as well as with Chelsea, who released a new album, Faster, Cheaper and Better Looking in 2006. He also plays in Glen Matlock’s band The Philistines, and has contributed to Matlock’s Open Mind and Born Running albums. He has also sometimes turned up in New York singer/songwriter Willie Nile’s band when they play the UK.

Stevenson is currently recording and playing with The International Swingers, who also include vocalist Gary Twinn, bassist Glen Matlock, and drummer Clem Burke. The band released a three-track CD, “The Shape of Things to Come” in January 2013, with an album titled Everything’s Getting Closer to Being Over to follow.