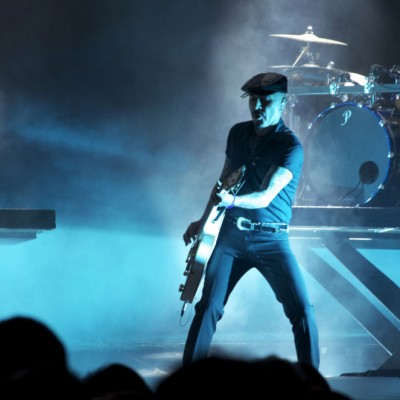 First time I saw Michael was when he played with Woody and Trevor Boulder in his band The Rats, who later became the Spiders from Mars, I was about 12 so it would have been around 1969. I also used to see Michael quite a bit when he was a gardener for Hull Parks. I often sagged off school and sat and watched him mow lawns at Bilton Grange Park. It seemed like one week he was mowing the lawn and the next week Bowie had his arm around him on Top Of The Pops! and I ended up thinking this bloke lives on my estate, Greatfield in Hull, and now he is on TV playing this great music!!! Fuck me I could do that! And that was the start of it for me. I worked hard and guess what,? Fuck me I did do that!!.

I owe Michael a big, big thank you for that seminal moment, one we all remember I think. It inspired me to get off my arse and try to form a band and led me to where I am today. Thanks Mick I owe ya big time man. And in my world Ziggy STILL plays Guitar…

Born in Hull 29 July 1957. Started playing Bass when I was 13 worked in a factory from 15 to 22. Fled to London when I was 24, joined ANOTHER band ….only this time started to get some attention. The band was led by a wonderful singer and my mate Sade. We toured and made a lot of albums. 4 time Grammy award winner (3 more than Elvis!), Brit Award Winner Best album 1984, numerous songwriting awards, and a shit load of Gold, Silver and Platinum discs, 60 million worldwide sales.

Just finished a World tour where we played to nearly a million people and grossed enough money to cancel third world debt!
Happily married To Kim we have a son Joe Dexter and a daughter Angel Rose. I live in L.A….. I fuckin hate it!.
I have had a hard but charmed life….wouldn’t change one minute of it.