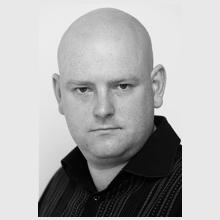 To me, Mick Ronson represents everything that I love about rock ‘n’ roll . When I heard The Man Who Sold The World as a 14 year-old it changed my life. Since then I’ve listened in awe and with gratitude to his unique genius and what he brought to music.

Tom’s musical career started as the singer and keyboard player in the Colchester punk band Maniac Squat in the early 90’s. The band toured extensively across Europe and released several records, with their single Fuck Off achieving the coveted ‘Single of the Week’ status in Kerrang! magazine in 1995. Maniac Squat and The Chavs have contributed many songs to TV soundtracks. Tom later joined The Chavs, a dark bluesy-rock ‘supergroup’, releasing the critically acclaimed album Angry Sex in 2004.  As a producer Tom’s discography includes Red Handed, the debut album of singer/songwriter Gillian Glover. Tom is currently a member of the band Kunsthalle; their new album featuring Woody Woodmansey will be released in 2013. When not making music Tom has helped to manage art galleries including Whitechapel Gallery and the ICA. He is Associate Curator, responsible for music, at the ICA.